What Is Non-Reportable Silver?

What Is Non-Reportable Silver?

What Is The Benefit Of Keeping Your Silver Purchases Private?

That is to say, we can all agree that silver should not be taken advantage of or used in dishonest ways. Certainly we do not want the low character criminals to get away with any crimes. On the other hand, governments frequently use promises of comfort to implement more restrictions and control.

Above all, we have a God-Given and a Country-Given right to purchase silver. Consequently, we do not need a government to restrict, report, or regulate our freedoms more than they already have.

What Is Non-Reportable Silver And What Is the Benefit Of Owning It? 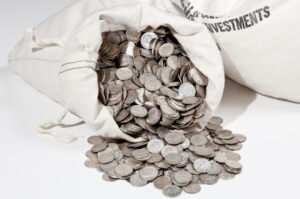 After having served tens of thousands of happy clients across all 50 United States of America, we have received the question “What is Non-Reportable Silver?” at least a dozen times each week. It turns out, our fellow Patriots are fed up with their privacy being violated. As a result, Non-Reportable Silver has become the most popular item at Patriot Gold Supply.

So, what is Non-Reportable Silver? In short, Non-Reportable Silver is silver coins that were created before 1965. These coins include quarters, dimes, nickels, and other denominations of United States Currency. However, the face value of the coin is not where the true value lies. Instead, the true value is in the physical material that the coin is made out of. Before 1965, these coins were made of silver. The small percentage of other metals mixed with the silver was to keep the coins durable since they were heavily circulated.

That to say, it is a benefit to own Non-Reportable Silver because it is not tracked / traced by the government, it is easy to trade / barter with, and it is incredibly easy to liquidate. After 1965, coins began to be created with cheaper metals. Although it should have, it did not change the price or value of the coin. A quarter was still a quarter even though the contents have changed.

To clarify, this is called “Devaluation” and it is a round-a-bout way of stealing done by a government from their citizens.

How Can You Acquire Non-Reportable Silver?

The silver you purchase has to be “Pre-1965”. Consequently, this silver can be more difficult to find. Similarly to Non-Reportable Gold, it is not as easy as walking into your local coin store and grabbing a bag of Non-Reportable Silver coins. Patriot Gold Supply has a vast connection with other Patriot and God-Fearing silver suppliers. Therefore, we are able to source you with the highest quality Non-Reportable Silver.

How To Hedge Your 401k And IRA Against Inflation

Inflation is the one word that you could use to sum up the last few years. It is a dark rain cloud that hovers over our 401k and IRA accounts. In addition, we never know when it is going to hockey stick to unbelievably high percentages. Many of our clients have reached out to us with a bit of concern in their voice. That is to say that they are terrified about losing their wealth.

Firstly, you save money all of your life. Secondly, you invest it into a 401k or an IRA. Then all of the sudden, extreme government overspending robs you blind of your retirement. This is not fair by any means and as a result, we have had a flood of inquiries about using retirement accounts to purchase Non-Reportable Silver.

In conclusion, we have the freedom to ask “What is Non-Reportable Silver?”, find the silver, and then purchase the silver. That freedom did not come at a small cost. The price for our freedoms is a large one. Moreover, some have given the ultimate sacrifice for us to enjoy life as we know it. Therefore, we must protect that freedom with all that we have and we must support those who made the sacrifice.

What Is Patriot Gold Supply?

Patriot Gold Supply was created out of necessity. A necessity for an honest, convenient, and patriotic gold supplier. We have come across an unbelievable amount of Deep State corporations who are selling silver with extraordinary fees stacked on top. The only objective of these corporations is to make a fast profit from their customers. We decided to bring a Christ-Loving company to market.

Long term relationships. That is our mission.

Above all, our standard is the GOLDEN rule. We treat others how we wish to be treated.

To find out more about Non-Reportable Silver and how to protect your wealth from inflation, call one of our Freedom-Loving Account Executives at (888) 959-1776. Because of the current administration and financial uncertainty of many Americans, our team has been overwhelmed with phone calls. Alternatively you can also enter your information into the form below and we will be in touch with you shortly.